Brian Standing: A Tribute To A Club Legend & A Gentleman 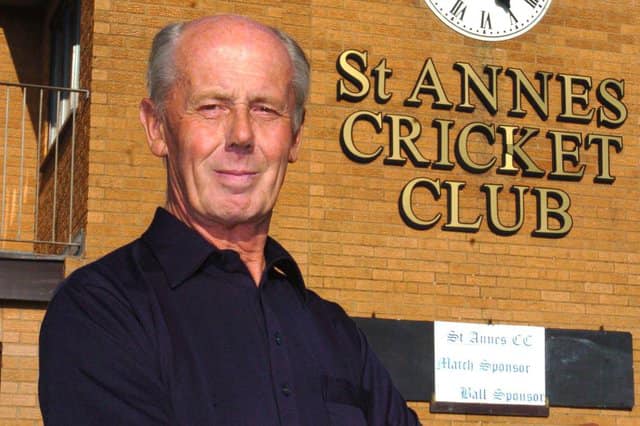 🖤 BRIAN STANDING’S FUNERAL‬
‪If you wish to pay your respects, Brian’s funeral will be held at 12:15pm on THURS 10th MARCH at Lytham Crematorium.

To celebrate Brian’s life, his family are having a private family meal ‬after the funeral. For club members and any of Brian’s friends, the family have given their blessing for you to gather after his funeral at St Annes Cricket Club to celebrate Brian’s life and recall fond memories of him.  The bar will be open and food will be provided for those attending.

Please share the above information with your friends/other members – thank you.

It is with a heavy heart that we share the sad news that one of our most respected and talented members and a club legend, Brian Standing, passed away on Wednesday.

First and foremost, we can’t begin to imagine how difficult this must be for Brian’s family. From us all at St Annes CC, our committee, staff, members, volunteers and our wider cricket family across the county, we offer you our heartfelt condolences. Please know that you are in our thoughts and prayers.

Brian was held in such high regard on and off the pitch by so many, and when we mention our wider cricketing family, that includes those who are located both across our wonderful red rose county and internationally, such as former club Professionals and overseas players, who Brian always welcomed with a gentlemanly handshake and a warm smile.

Over Half A Century Of Service

You see the thing that was evident about Brian is that he had high standards. He had pride. He was honest, hard-working and the kindest of men. Loyal to his family, his club, everyone at the club and beyond.

He wore the St Annes CC club crest with pride. He was committed to making the club the best it could be on his watch, no matter what role he was in.  He was a distinguished ambassador for cricket and for club, and his roles were many during his time with us… which spanned 58 years at St Annes CC! That in itself is an incredbile achievement that not many, if any, can claim for themselves.

Where It All Began 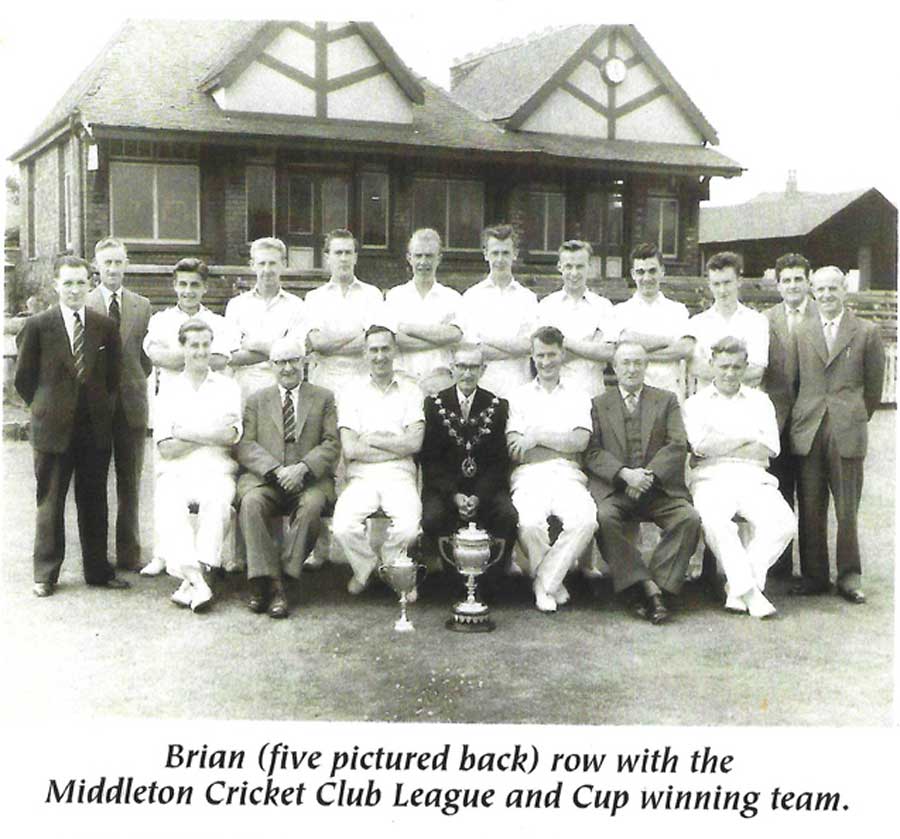 Brian played for Middleton Cricket Club in the Central Lancashire League, where a journalist of the local press wrote:

A fast bowler in the making is 17 year old Brian Standing, a member of Middleton CC. Further pace and accuracy will come his way and many of the one time players and present members speak encouragingly of his proficiency.

In the near future, Brian will make the grade.”

The following season, he notched 31 wickets for 643 runs in 187 overs for a 20.74 average. The next six seasons he surpassed that, taking over 40 wickets in each. 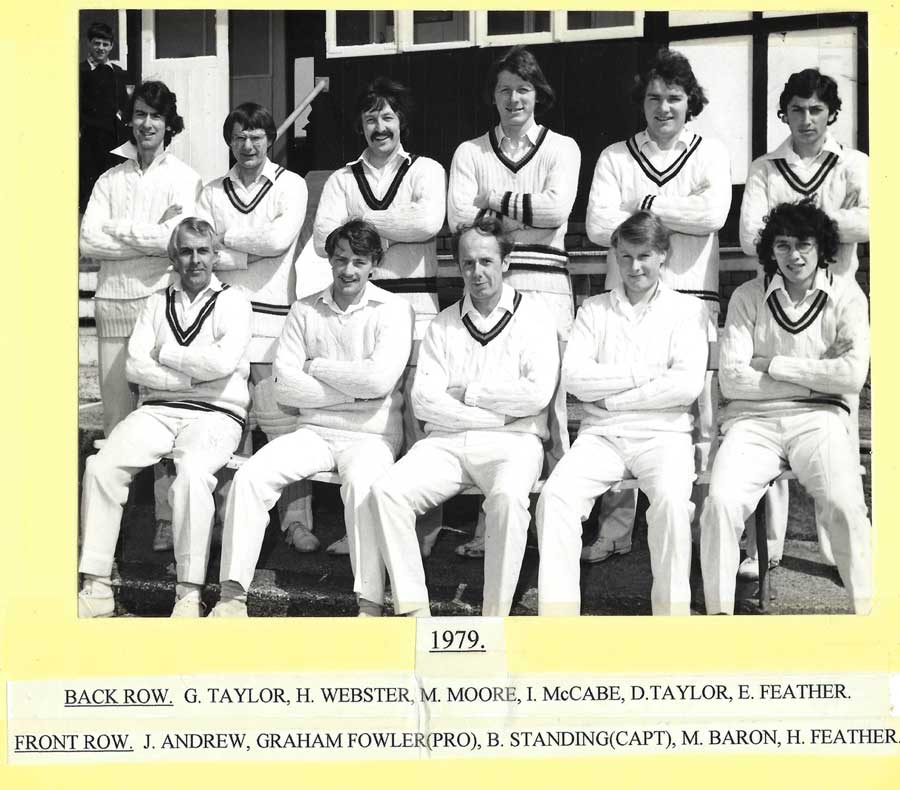 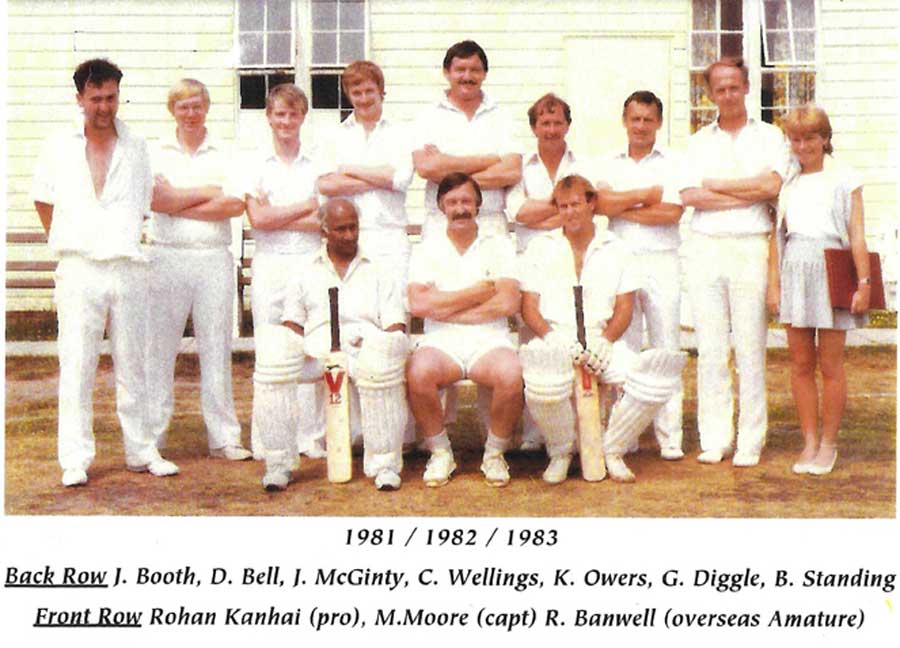 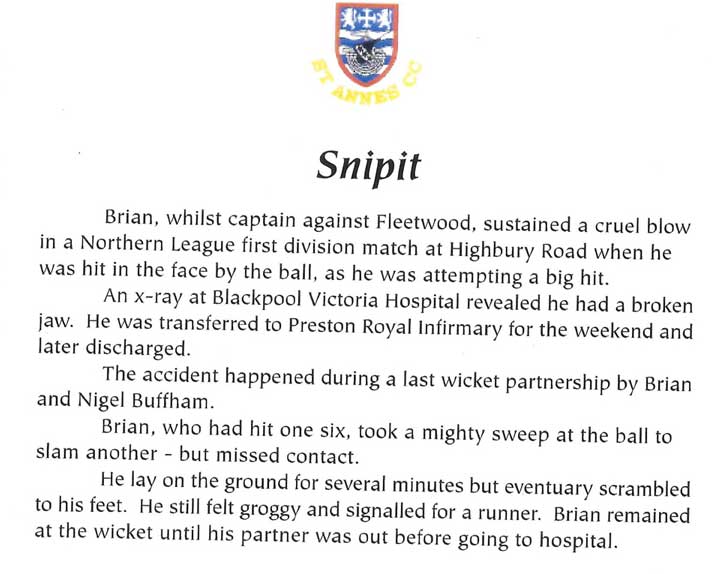 Brian Standing played on with a broken jaw!

The highlight of Brian’s career was an unforgettable day of cricket at Highbury Road in 1966 which placed St Annes Cricket Club in the Northern Premier Cricket League record books!  In the opening fixture of the season, St Annes CC routed Darwen CC for 6 runs (that’s not a typo, Darwen were all out for 6!!)

Paceman Brian claimed 5 wickets for 5 runs. A career best for Brian and a proud moment that many a bowler would be proud to boast about. But Brian was a humble man.  To him, he was doing his job for club and his team.

At the other end, left-arm bowler John Kettlestring made his debut and set a new individual record by taking 5 wickets for 1 run.  What an incredible achievement for them both! 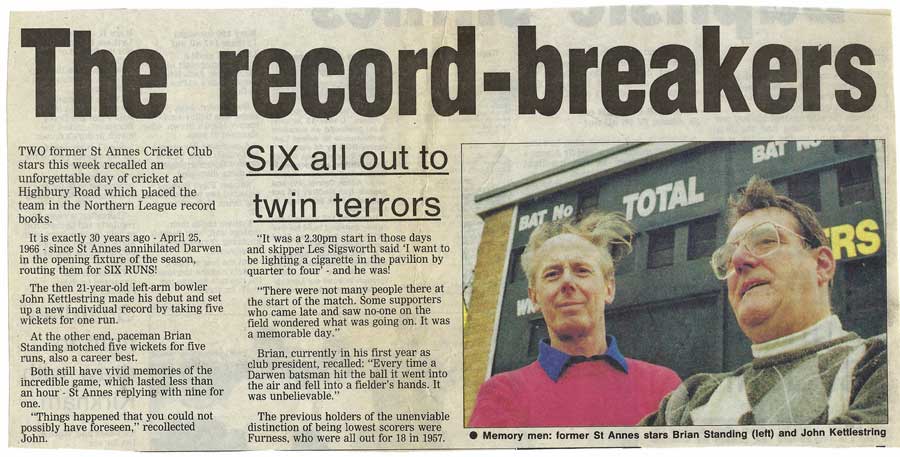 Brian’s success flowed until 1988 when disaster struck after mounting almost 800 wickets in Northern Premier Cricket League and Cup matches, a dreaded physical injury to his knees cut short his playing career. But Brian was not completely finished – he came out of retirement following an injury to our Professional, and in his first match, Brian had a super spell of 7 wickets for 51 runs in an unchanged spell against Chorley.

Further acclaim was not far away.  Brian was recognised for his loyalty to the Northern Premier Cricket League and he was elected as league President, which coincided with him becoming St Annes CC Club President. 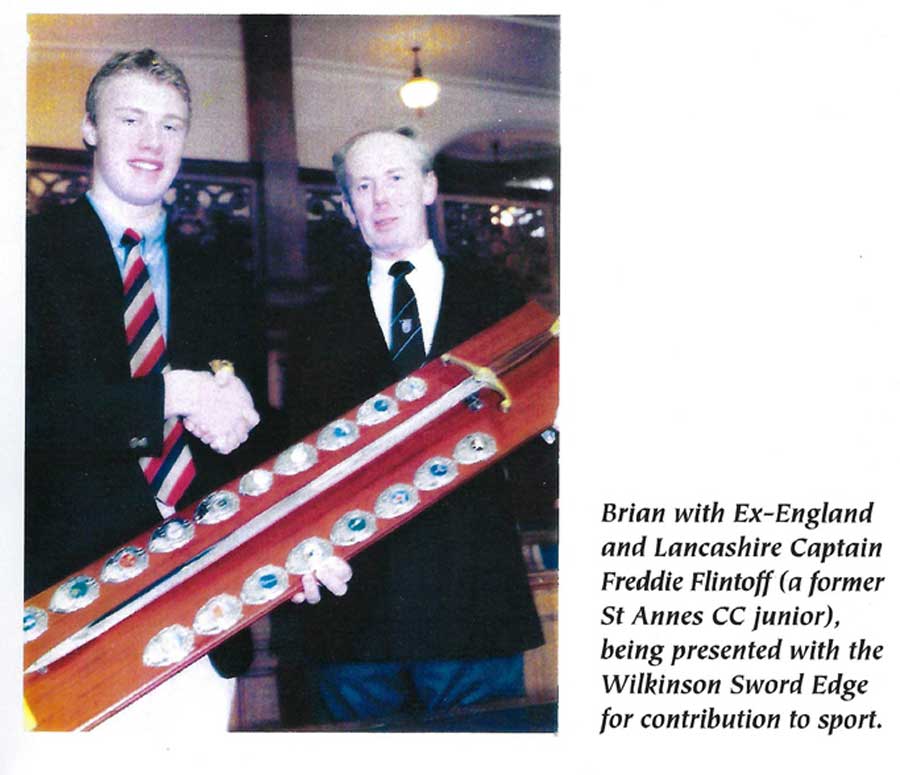 Brian Standing with Andrew Flintoff, being presented with the Wilkinson Sword Edge Award 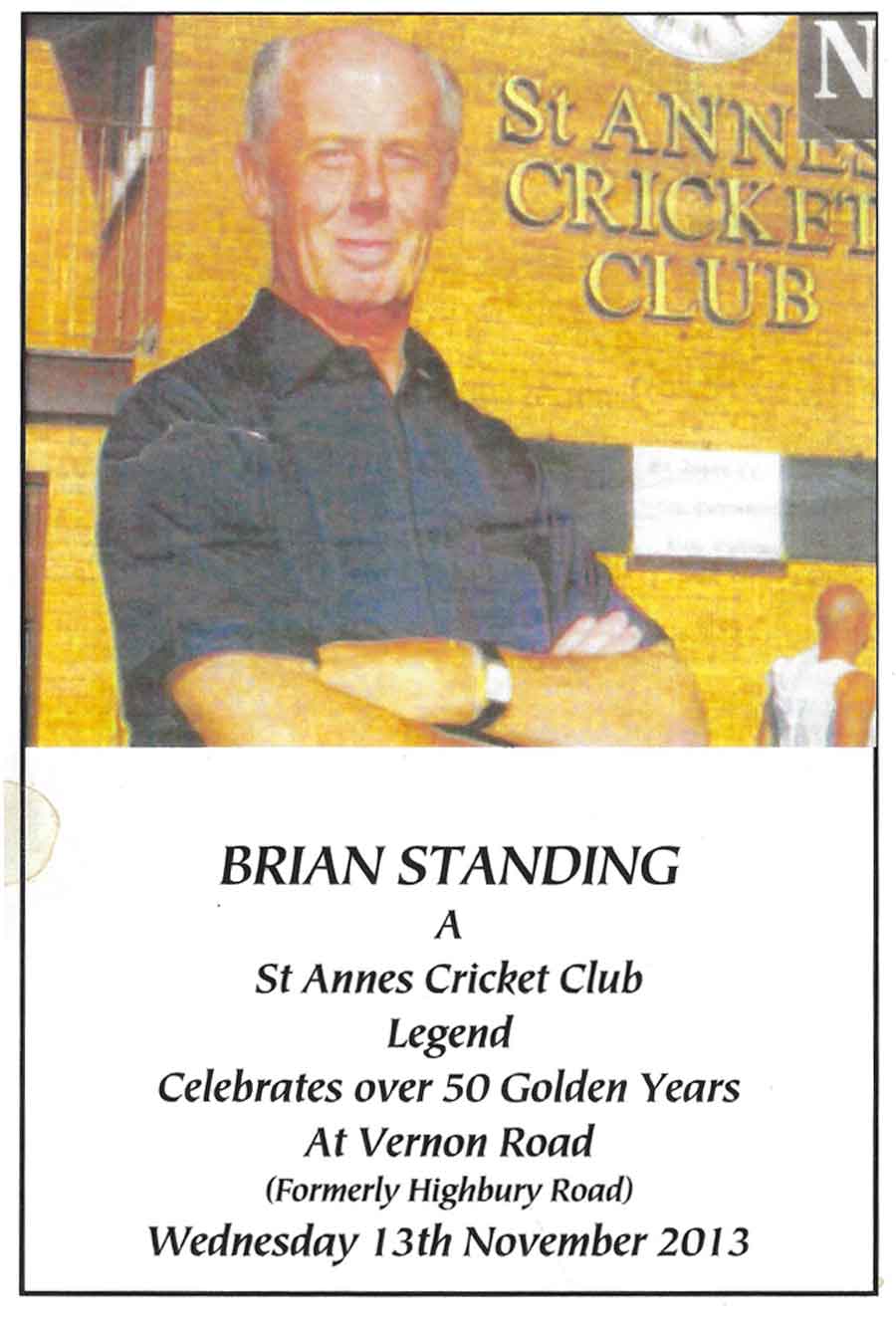 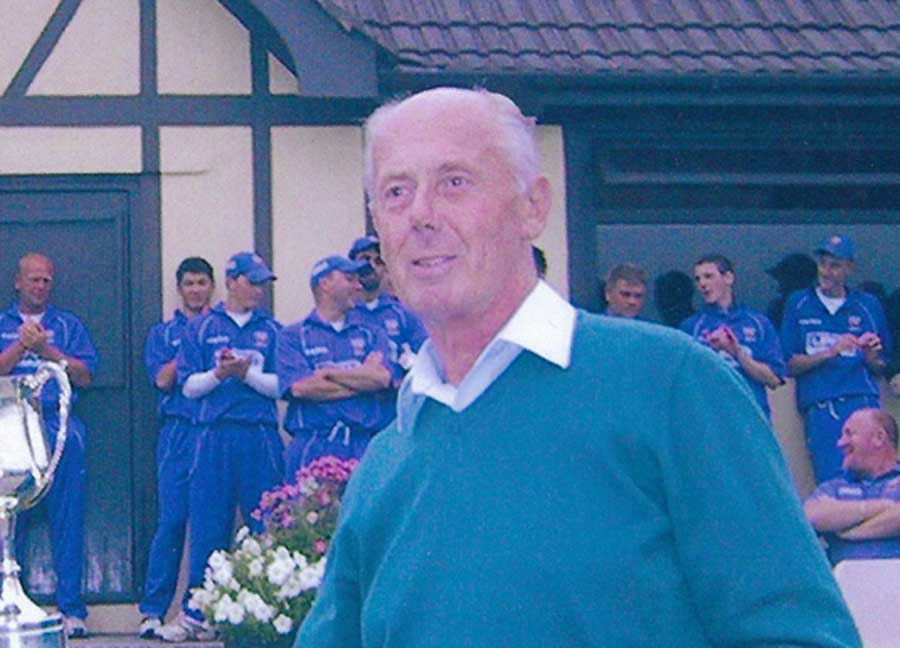 “One of St Anne’s Cricket Clubs legends, if not the greatest has passed away.

Brian was a true gentleman and a great ambassador for both the club and the league, and I am sure there are many people who have very fond memories of Brian both on and off the field.

I had the pleasure of playing with Brian in the latter stages of his career, and I remember asking him to come out of retirement and play in the 1st team at Chorley as we were short. He had bad knees, and he was age 50 at the time, but he opened the bowling, bowled right through the innings and took 7 wickets.

I asked him to play in the cup game the next day. He turned up and he could hardly walk, but he insisted on opening the bowling. That sums up Brian, he would put St Anne’s Cricket Club before anything else.

He would never miss a game, summer holidays were taken Monday to Friday so he could come home and play cricket on the Saturday.

He had a great sense of humour too and I remember once at Darwen I had to open the bowling. The ball got hit out of the ground and I could hear Brian hollow  “that’s another £20 you’ve cost the club!“.

I could talk all day about Brian, but I will end with a tale about when we were playing Fleetwood CC and the wicket wasnt good.  Jack Armstrong, their captain, said to Brian “The wicket is dangerous, you could grow potatoes on there!“. At the end of the game, Brian presented Jack with a 5lb bag of King Edward’s and said “I’ve just dug these up from the wicket!!” – he went to the shop and bought them for a laugh.

I was lucky enough to have Brian as a friend and we used to go to the races together.

I will always remember my times with Brian with fondness. He will never be forgotten and will be remembered with the utmost respect. In my opinion, Brian was one of the greatest, and in my mind he always will be.

Our sincere condolences and our thoughts are with his family, particularly his daughters Susan and Louise and his grandchildren.” 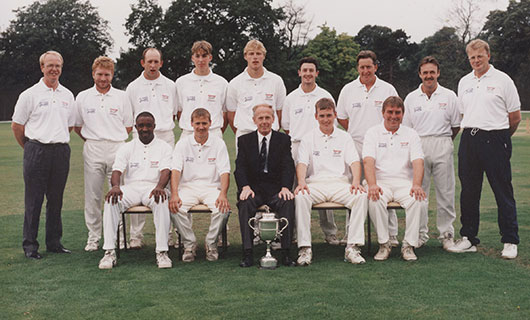 What a wonderful innings of 84 you enjoyed.  Walking around the boundary will not be the same without you cheering on Team Saints.  We will miss you. 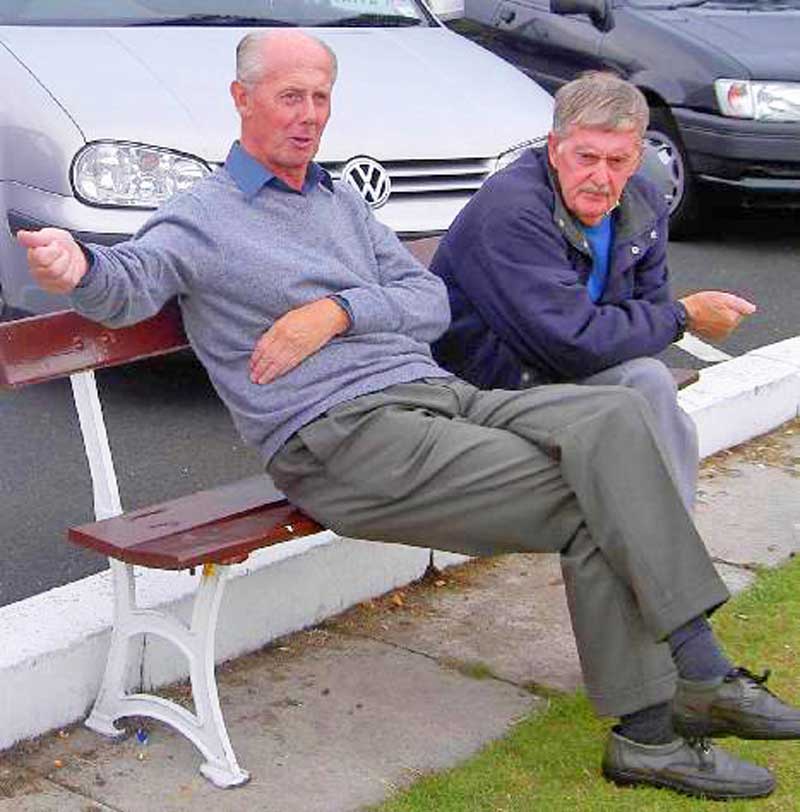